As our journey is reaching its' end, it is appropriate that we complete the circle which we began and return to Thailand. In fact, we found ourselves in the very place where we entered this excursion: Chiang Mai. Upon returning to Thailand, we were surprised at how modern and clean everything was, which of course is in contrast to our first impression back in December. 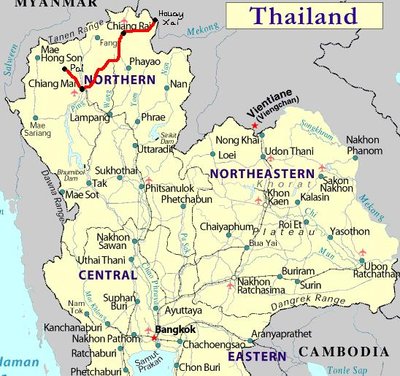 Before spending another 5 days in Chiang Mai, we took a quick jaunt up to the north into the mountains of Northern Thailand that we had missed on the first go. We spent three nights in the cute little town of Pai, which is nestled in the valley. Despite the fact that the town is overrun with hippie-minded westerners and lacks much Thai culture, it was a very relaxing place with yoga lessons and live music everywhere. Imagine being halfway around the world listening to a wonderful acoustic version of "Blackbird", pretty cool. 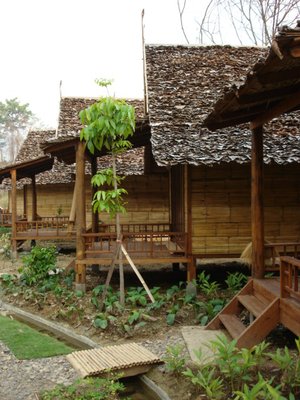 Our adorable bungalow along the Pai River. 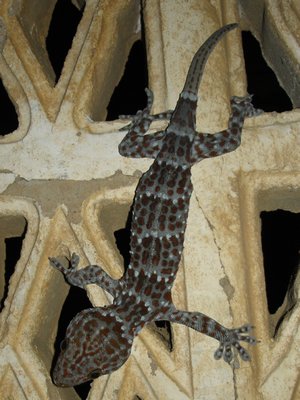 A massive gecko. We have been hearing these in the evenings for a while, but this is the first one we actually got to see. It's easy to know when you are hearing one, they basically call out their presence: "Gecko, Gecko, Gecko". 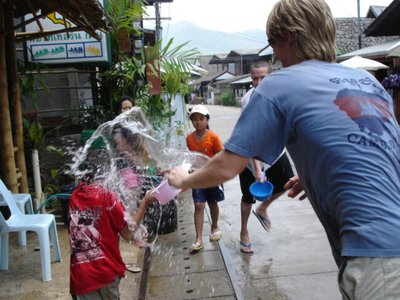 A preview of Songkran (Thai New Year) - more to come.

We returned to Chiang Mai in time to celebrate the Thai New Year, or Songkran. The main festivity of the week, other than receiving blessings for the new year, is to get every person in sight as wet as you can possibly make them. People of all ages hit the streets with buckets, hoses, and water guns to soak passersby. It is physically impossible to not get wet, but considering that it is the hottest month in Thailand (and it is really hot), you don't try very hard to avoid it. Chiang Mai is widely known as the best place in Thailand to experience this, so we bought some buckets and threw ourselves into the madness. 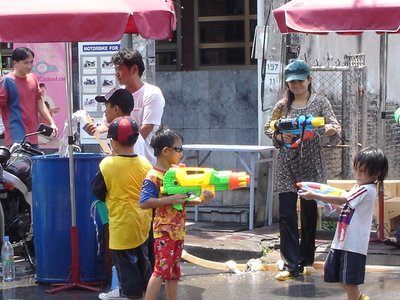 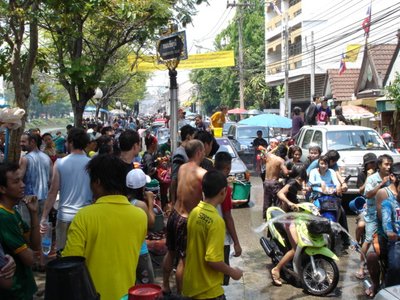 The main street around the old city. 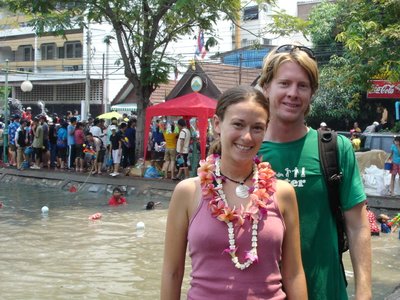 Us before we were soaked. We were only spared because we had our camera out, once that was gone, there was no escape. 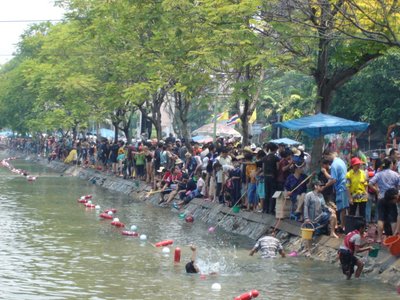 The moat around the city where people have an endless supply of water. 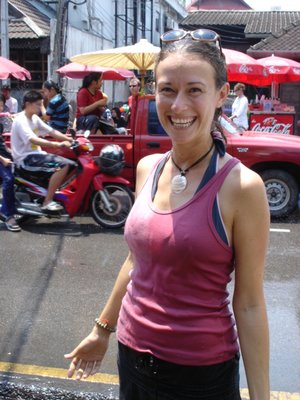 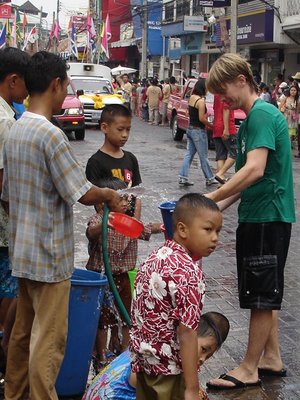 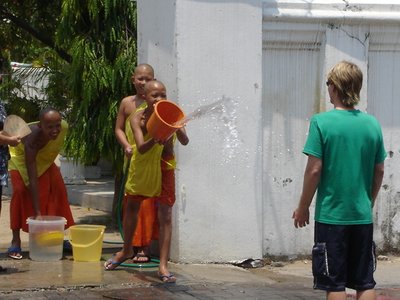 Justin getting his first soaking of the day from a few novice monks.

On the day before New Year's, there is a huge parade through the streets where people come to splash water on statues of Buddha (as well as each other and anyone else walking in or watching the parade). 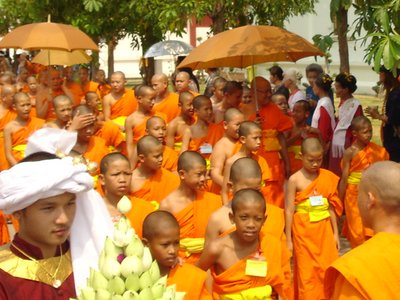 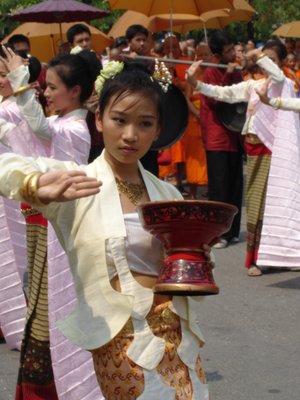 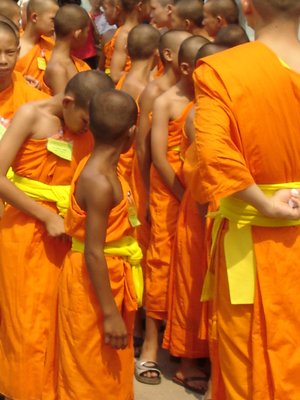 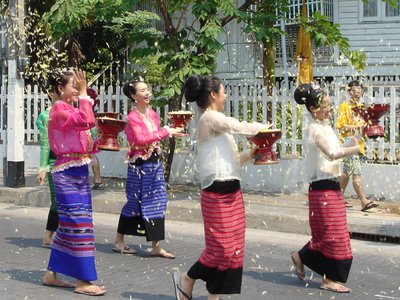 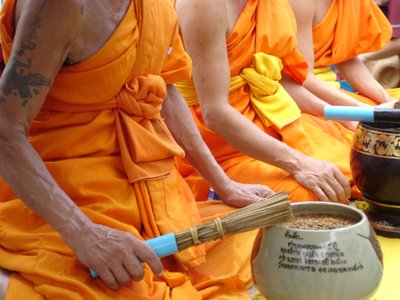 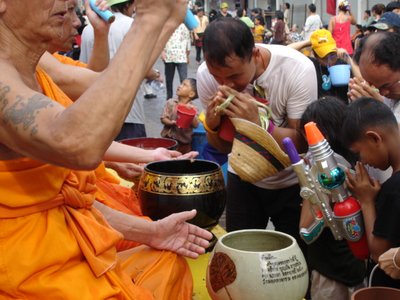 The monks giving blessings to the parade and passersby - water guns deserve blessings, too!

It was so nice to return to Chiang Mai and to feel not-so-foreign in a foreign city. Songkran in Chiang Mai may not have the reputation of Mardis Gras or the running of the bulls, but it was a wild time and highly recommended on things to do in your life (if you get the opportunity).

Posted by rebmamber 05:23 Archived in Thailand

Whow .... so our adventure is almost over. We certainly had a good time, lots of good memories and wonderful pictures. You always seem to arrive for the parties!!!

so the monks threw water on justin, isn't that displaying agression by way of an easy target.
so when you guys get back we''' go to a thai restaurant for dinner right?
ok how bout an Iowa steak for J and some Iowa corn for A, we'll follow that up with some apple pie, freedom fries and a 64 ounce refillable coke.

One of those monks had a pretty nice tat! I guess he could be on the tv show Chian Mai Ink! I did my part to experience eastern Asian culture by dancing with 2 Vietnamese girls last night........too bookoo, too bookoo!I look foward to seeing you when you get back.

I think I would get along just fine in hippie minded Chiang Mai.
What fun for a new year’s party!
Yep, Sorry your adventure is almost over.
Will miss the blog!
Glad you had such a good time!
See you soon! Lets go fishin?

When you get back, your de-briefing can begin at our house, watching the sunset with a Sex-On-The-Beach in each hand, (plastic cups of course). Seriously, let us know when you're back. I am so looking forward to seeing you! Though sadly, my email is going to be pretty boring without your wonderful blogs.
Love & hugs,
Bonnie