We realize that we have had some delays in the recent blogs; it's not that we don't care anymore; it's just that Laos is not quite as technologically advanced as the other countries in SE Asia. However, that's part of its charm and we have been embracing it! Besides, who cares how and what we are doing, HOW ABOUT THOSE GATORS!!!!!!!!!!! We will leave the country come football season for good luck. 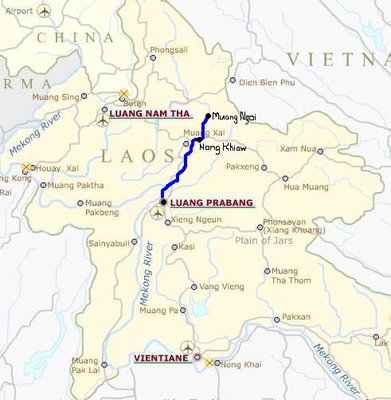 Having relaxed in the tranquility and relative moderness of Luang Prabang for 5 nights, we decided to take a slow boat north to a less-traveled and more remote area of Laos. The “6-hour” boat ride as expected took 8-hours, but the scenery was amazing and the occasional splash of cool mountain water was refreshing. It being the dry season in Laos, the river was a bit low in places and going up river there were numerous rapids we had to traverse, practically reaching a stand still on a few of the bigger ones. At one point the boat stopped along shore and the captain made hand motions which either meant to get out of the boat and walk up river or he was being annoyed by a very persistent fly. So we stretched our legs a bit while the captain and first mate pushed the boat up river (and I say boat loosely, we're talking a wooden canoe with a engine). But, two sore butts later, one new propeller, and a bunch of pictures, we made it to the small town of Nong Khiaw. 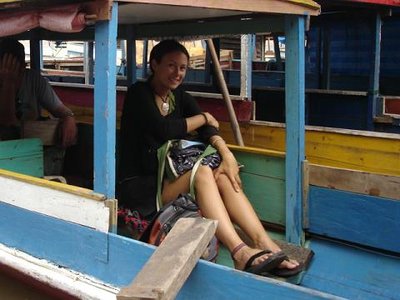 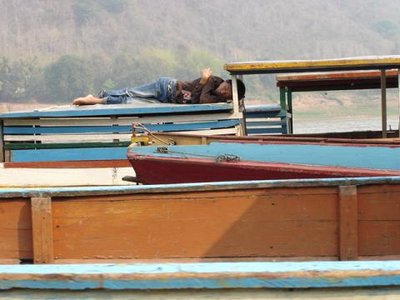 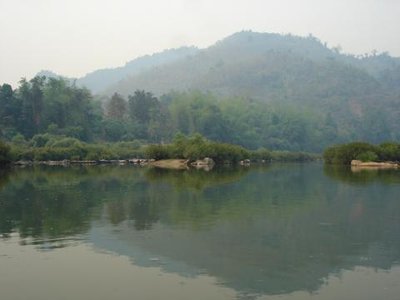 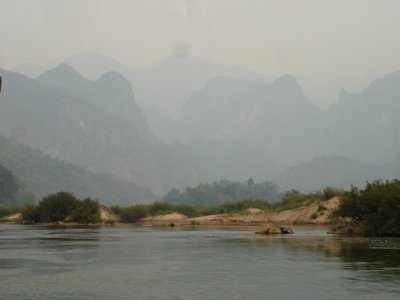 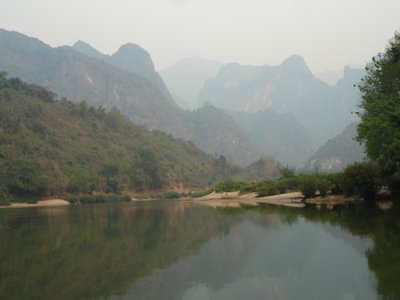 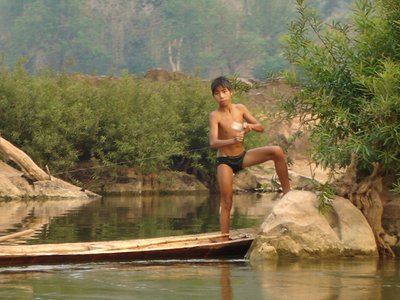 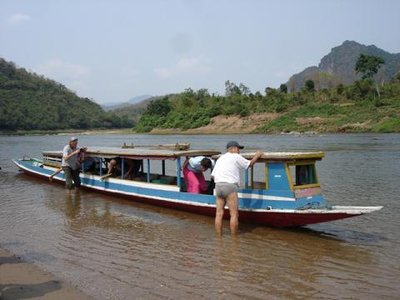 A view of the first mate in his skivvies. 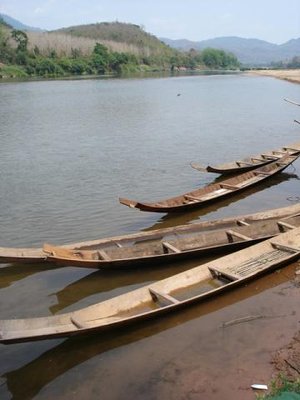 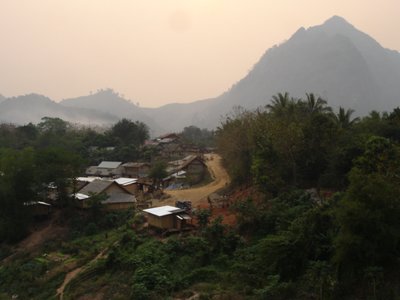 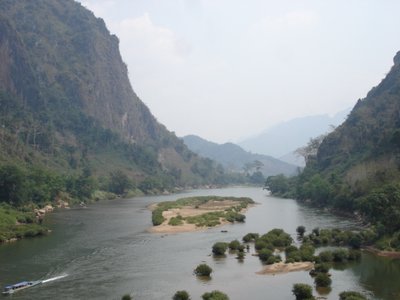 View from the bridge over the Ou River. 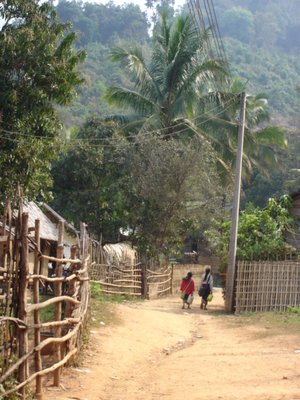 The alleyway to our guesthouse.

We spent one night in Nong Khiaw and then headed up river the following day another hour to the village of Muang Ngoi. 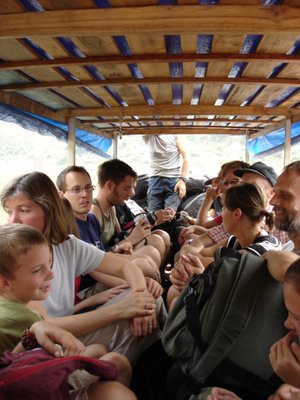 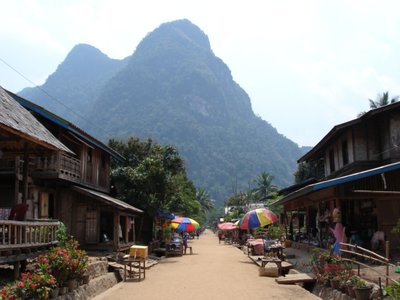 The mountains that surround the small village of about 500 people are impassible by motor vehicles, so there is not a car, motor bike, tractor, etc anywhere to be found or heard! The coconut tree-lined dirt footpaths and the tropical jungle right down to the clear river give this town a real "south pacific" feel, although we haven't been to the south pacific, but we're guessing it's pretty nice. 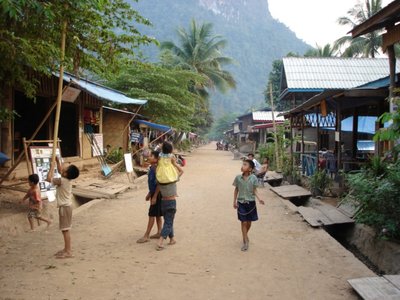 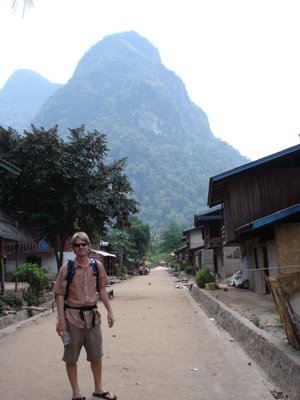 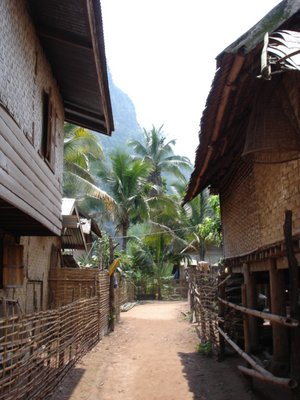 We stayed in a small bamboo bungalow on the bank overlooking the Ou River. A basic place, but what a view (I should mention it cost a whopping 1 USD!) Every night, the geckos chirped us to sleep while the roosters gave us our morning wake up call, which is quite typical throughout all of Laos. 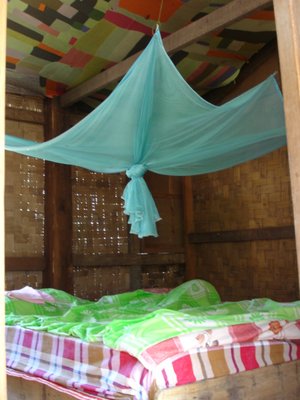 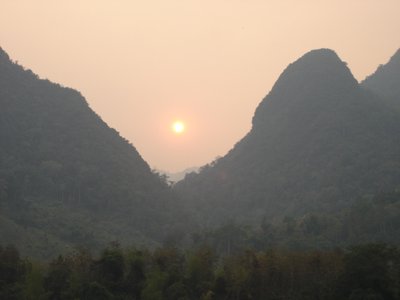 This is literally our view from our bungalow.

The village only has power, via generators, from 7 pm - 10 pm and very little running water. All day, kids played in the river, most buck-naked, as all kids love to be. Every evening before sunset, most of the villagers would make their way down to the river to clean themselves, their clothes, or whatever else in the river. I (Justin) partook in this bathing ritual and got many a strange look when I bared my pasty white chest.

We went on a nice hike into the surrounding mountains and villages one day and did a bit of tubing and canoeing as well another day. But our three days in Muang Noi pretty much involved relaxing and reading. 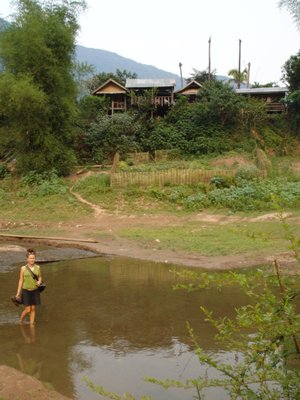 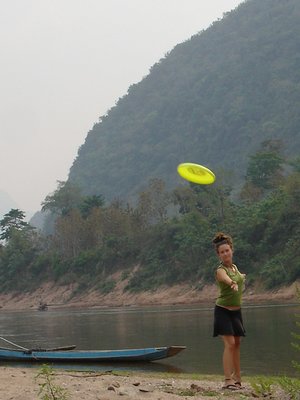 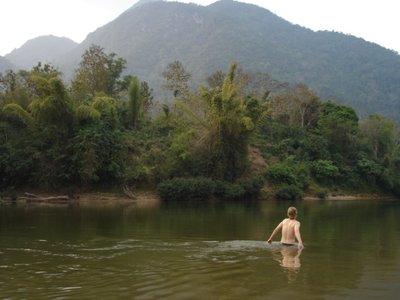 Yes, the water was a little chilly. 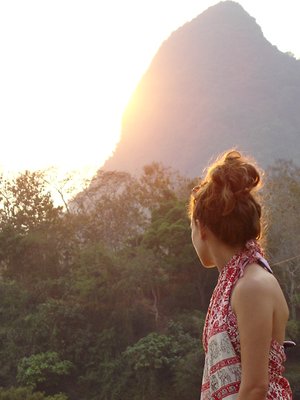 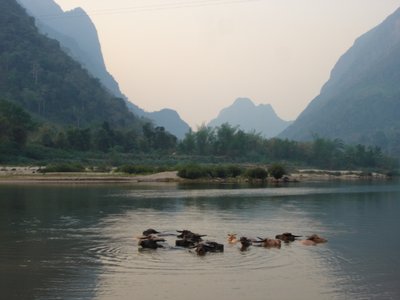 The water buffalo enjoying a dip at sunset. 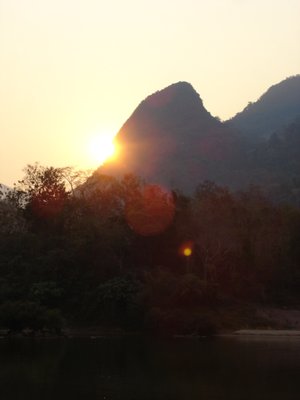 View of the town from the river. 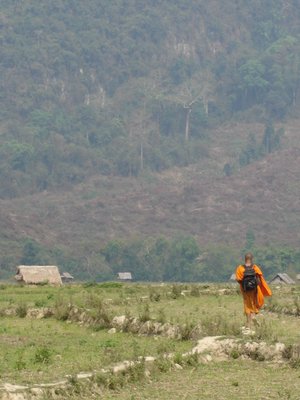 An adorable baby, called "Et Noi", which literally means "baby". We were told that the children are not given official names until they can walk. 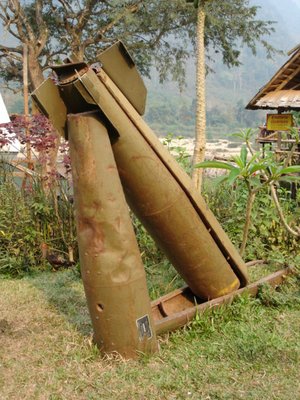 Some of the many bomb casings used around town. You'll see them as decoration, used as flowerpots, animal feeders and even supports for houses. 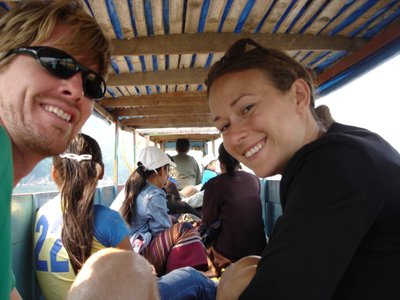 Taking the local boat back to Nong Khiaw.

Posted by rebmamber 05:21 Archived in Laos

do yourself a favor:
find a copy of 'the quiet american' by graham greene

ps: is 'if on a winter's nite a traveler' the best book i ever read?
pps quite possibly

I had a feeling that Laos would be your favorite spot...i met many people who said great things about it...enjoy!

I guess the speedo really is universal! I also know from first hand experience that the "mullet" is fashionable across the globe, yet narry a pic of one on your site this entire time, very disapointing!

I've been dreaming of a town sans motors a lot lately, but wondered if any still existed. Now I'll have to dream of something else, you spoilers - before it was kinda like a unicorn or something. Calvino is the master - read "Invisible Cities."

Your smiles say it all!

That boat would be awesome with a jack plate and a 225 Yamaha VX. Looks very peaceful, great place to pass some time and read

IM IN FLORIDA right now, nothing much has changed. i have to get back and peel some peppers and get some aloe on my face - slept in the sun too long. happy travels and many more returns.