We just finished our stint of volunteering and it was definitely a worthwhile experience. We talked a lot in the past two blogs about the work that we did, but I haven't mentioned much about life outside of the project. I would have to say that the biggest adjustment was living in a house with about 18 other people. When you are used to a lot of alone time, being with people 24-7 is not easy. The Vietnamese culture is very sociable and communal and they don't really see a reason to have alone time. It is actually seen as sad when someone is alone. But, besides the small annoyances, we really made some great bonds over the 2 weeks with our fellow volunteers and wouldn't change a thing (well, maybe more toilet paper!)

Here are some photos from the Peace house where we stayed: 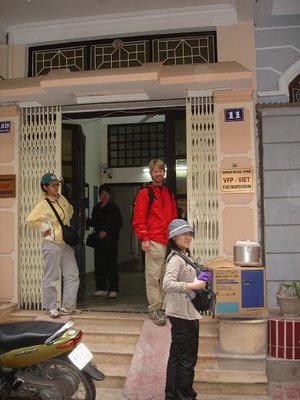 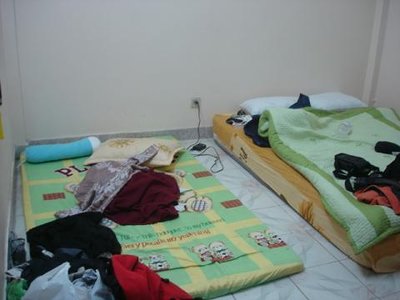 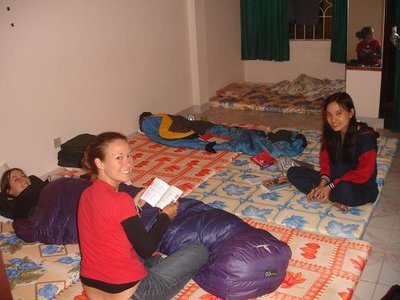 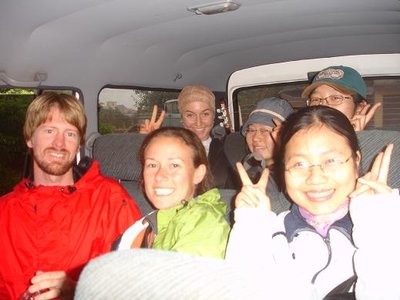 Our daily van ride to the village where we passed new condos, supermarkets, rice paddies, and BBQ-ed dogs on tables. Yes, dogs, whole or in half, smiling at us - more on that later...

Most of the time in the house, we hung out together. One very common pastime was playing cards with Khiem and Khai, two very competitive Vietnamese brothers. They were fantastic at counting cards and we were lucky they didn't gamble or we would probably be asking for handouts right about now. While they killed us in playing Hearts, we managed to take the lead when we introduced them to Big 2. 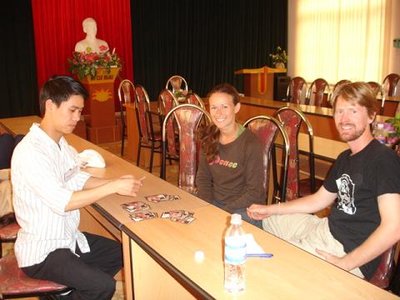 We also ate most of our dinners together in the house. They were usually prepared by a Vietnamese girl, Hung, but USA took over one night to make an authentic American meal - Mexican food, of course. Ingredients were a little hard to come by, but a little experimenting and the meal was a success (who would have thought we would have to go Vietnam to learn how to make flour tortillas)! The Korean volunteers also took a night to cook, and yes Dad, we tried Kim Chi and Justin liked the cabbagey dishes! Justin tried his hardest to curb the use of MSG, but communication skills were weak and we are now numb to salty food. 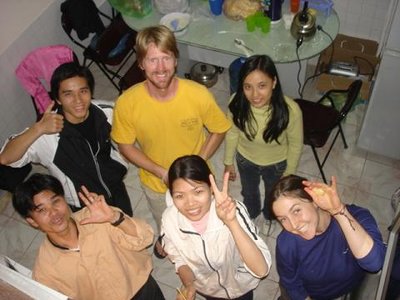 Helping out in the kitchen. 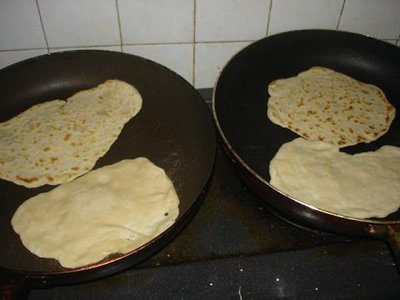 In our free time, many of the Vietnamese volunteers and staff showed us around Hanoi. It was wonderful having our own personal tour guides that would prevent us from getting overcharged for everything. Here are some photos from around town:

We visited a night market. 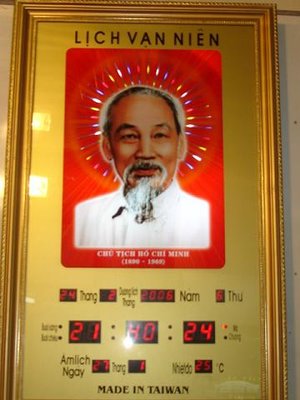 We were very tempted to buy this tasteful clock honoring Ho Chi Minh, but we couldn't fit it in our packs. 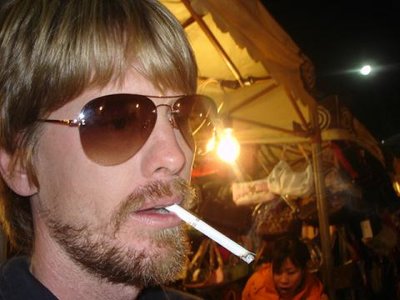 Justin picks up a smoking habit.

The Ho Chi Minh Mausoleum, where Ho's embalmed body is on display. Too bad you're not allowed to take photos inside! The experience of just getting into the Mausoleum is worth a trip to Vietnam. We have never experienced such unnecessary waiting in line, dropping off of bags, security screenings, picking up bags, dropping back off bags, single-file walking, no hands in your pockets or crossing of the arms (yes, I (Justin) was tapped on the shoulder for both), picking up of bags (in a different location from where we dropped them off), etc. The guy is pumped full of formaldehyde, do you think he minds if I have my arms crossed?????

Out for some famous Vietnamese Pho. 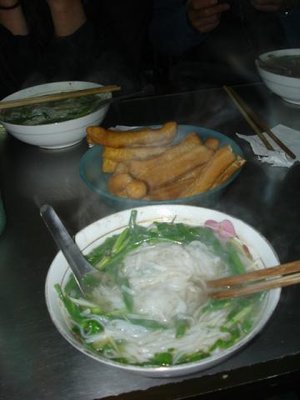 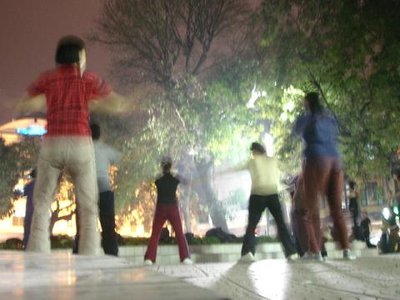 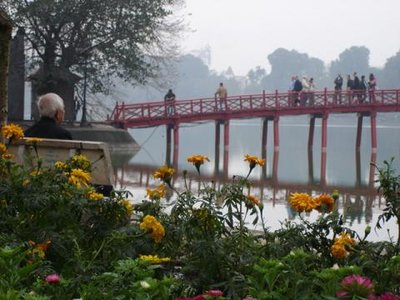 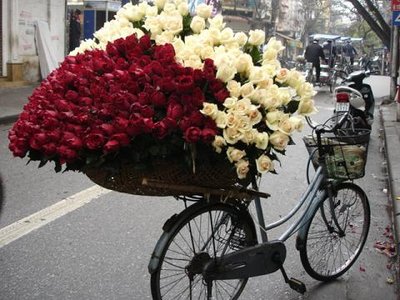 Hanoi is famous for it's water puppet show. 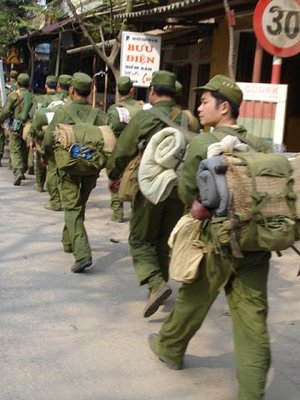 A visit to the Ho Chi Minh museum and house. 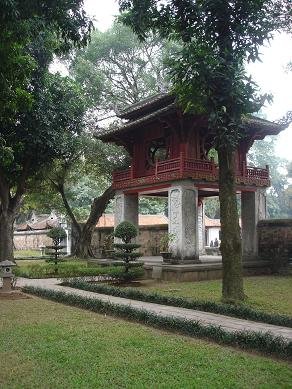 Inside the Temple of Literature, a 1,000 year old complex and Vietnam's first university. 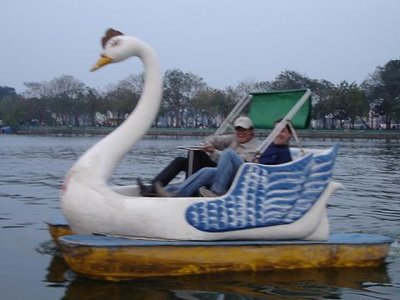 A visit to Vietnam wouldn't be complete without a romantic tour on a swan boat. AWWWWW!! (We were forced, I swear)

We were invited to one of the volunteer's (Linh) family's house for dinner one night and were fed a huge meal of spring rolls and soup. Linh lives with her parents, brother and grandparents, which is the norm in Vietnam. Her entire family made us feel right at home. After dinner, I (Justin) won the ping-pong tournament, so I think we are even with Vietnam! 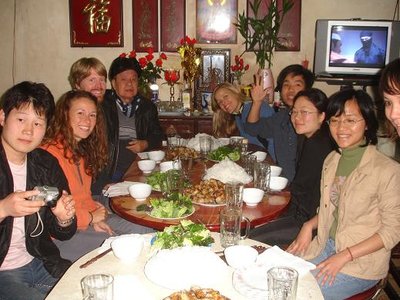 They lived across from a dog meat restaurant, which kept us entertained for a while. The place had some chopped up pooch on the table and a big live dog hanging out inside. When we asked if the live dog was on the menu for tomorrow, they laughed and said, "No, he's a friend". 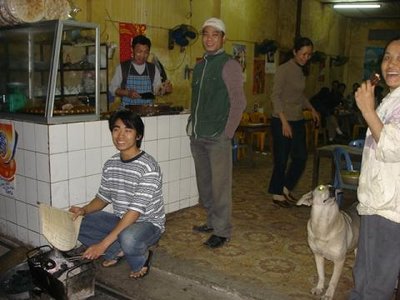 Linh's family dog was being a bit annoying, so Justin took him to the restaurant to give him a little scare. 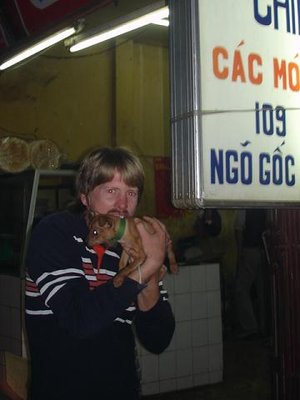 Our final night together with all the volunteers we had a huge farewell dinner and managed to jam about 30 people into the "dining room". It was one heck of a meal and we had a great time. 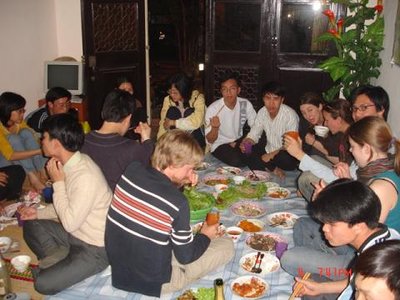 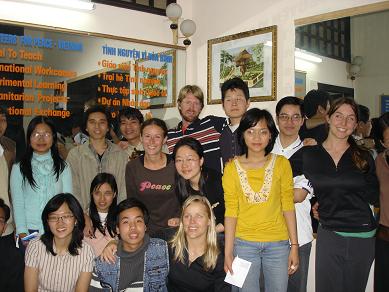 Posted by rebmamber 19:57 Archived in Vietnam

Did you know that you would be volunteering before you left. What a great experience. Like the beard.

What a fabulous journey! I wish my beard was as sparse and cool as Justin's...instead I must shave my forehead every other day! Does Joanna have a boyfriend? Love and miss you!