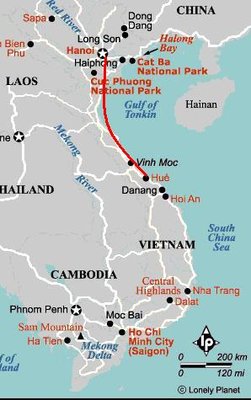 We touched down in Hanoi after a 4-hour delay and were greeted with a blast of cool air as we exited the plane. We were impressed to de-plane at a proper terminal instead of exiting on the tarmac like all our previous flights in SE Asia.

Hanoi, the capital of Vietnam, is located in the northern part of the country (as I'm sure most of you who lived through the war years remember). The city buzzes with traffic, mainly scooters, but a few more SUV's mixed in for added excitement. The city feels more sprawling than Saigon and there are a lot more new construction and buildings all around. However, the older buildings are definitely more eclectic and have a little more character. For the most part the people seem similar to the Vietnamese in the south, although maybe a little more traditional and definitely less modern and westernized. The city seems less touristy than the majority of the ones we have been to thus far, but we certainly see a fair share of smiling faces wanting to sell us something.

A few locals chillin' on a street corner.

The little alleys in the Old Quarter of Hanoi are designated for different products and are also named accordingly, although in Vietnamese. For example, “Silk Street” contains silk products, "Steel Street" is full of things made from steel, etc. It is so funny to see shop after shop overflowing with the exact same products. They even have a street specifically for wooden birdcages. 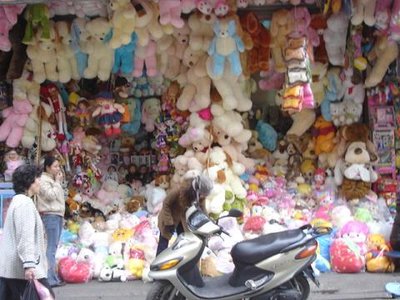 A scene from "Toy Street”.

Get your spices on "Spice Street”.

And of course, your sewing products.

We were scheduled to report to our volunteering stint on Monday morning, so we spent all day Sunday unsuccessfully searching for a couple items that we needed for the work we were to do. (We later found out we were fine without them) Due to this, we didn't do much sightseeing, but it's fun enough walking along the tiny alleys. The "roads" were made for bicycle traffic, but now handle gobs of scooters and a few cars and trucks manage to squeeze through as well. Walking around is an adventure sport as the sidewalks are littered with parked scooters and the roads are streaming with traffic going every which way in any lane open. 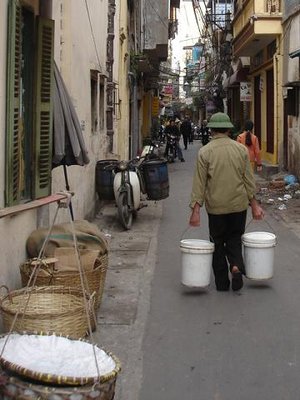 Pagoda in the middle of Hoan Kiem Lake at day… 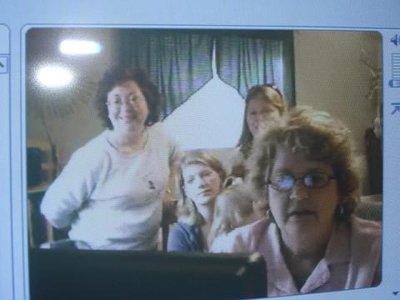 Technology is great! Our webcam conversation with the entire fam.

Posted by rebmamber 17:38 Archived in Vietnam

Justin, when you get back, are you going to have a coomey style woodsmen beard that little endangered birds make their nest inside of? me and liz ate at a veitnamese place this weekend, i thought of you two. what are your next stops?

"Beard" may have to stay until we are done with volunteering as the kids may not recognized me without it.
-Woodsman

elizabeth bishop
from 'one art'

the art of losing isn't hard to master;
so many things seem filed with the intent
to be lost that their loss is no disaster

Well no wonder you didn't return my calls! Wow! I have too much to say as a comment so I will e-mail you when I am not at work...Wow...