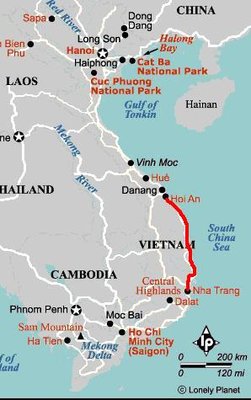 Hoi An - With photos (back by popular demand)!

Hoi An is a small city of around 75,000 along the Thu Bon River with charming streets lined with French architecture. 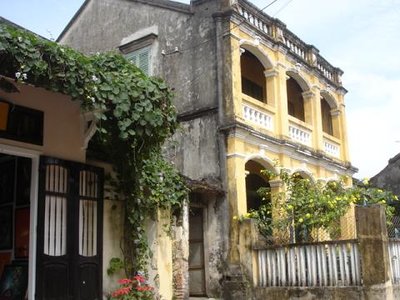 Every narrow street has just enough cafés and a ridiculous amount of tailor shops. Nearly every traveler leaves here with an extra bag or two full of custom-made clothes/shoes. We were no exception and are sporting several more items to carry around for a while. The shopper in Amber surfaced and I even got into it a bit. It was good fun being measured for a couple of pants and coming back later that day and trying on the finished product. If a bit more room is needed, no problem, come back in an hour and taaaaadaaaaa, perfection! 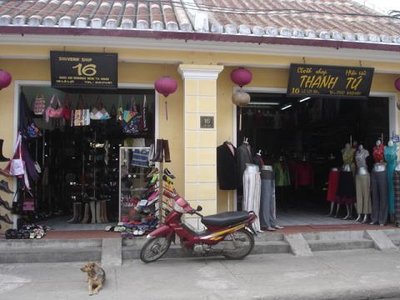 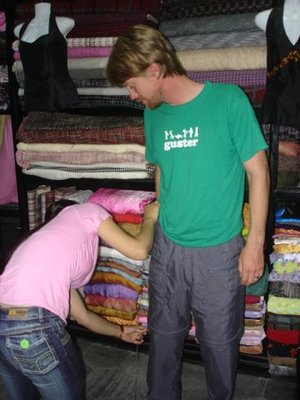 Our first night in Hoi An we stayed at a small guest house built in the early 1800's. The entire place was wall-to-wall wood work and just spectacular. Step out of this guesthouse and you are immediately immersed in the buzzing central market. To get to the guesthouse, we had to hike through the market, luggage and all, which was good fun. However, we learned quickly the next morning that markets buzz very early and decided to relocate after one night to a place where we could sleep a little past 5 am (we're on holiday after all).

Good fortune blessed us and we happened to be in town for some sort of night festival, complete with floating lanterns, mock "ninja" fighting, a parade, and such. The entire old town, which is a World Heritage Site, turns off its’ electricity and the streets are filled with torches and candlelight. Complete with the ancient looking architecture, you felt as though you just got out of the Delorian in 1750! 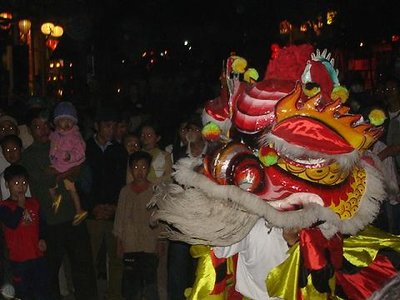 We rented bikes one day and headed out a few kilometers to the beach, which if you walked about 20 kilometers north, you would reach the famous China Beach. After chilling on the beach for a while we rode further along the beach to a small village, where we were overwhelmed by school children. A little bit out of the tourist area, we quickly became a spectacle to see, touch, and talk to.

Some photos around town:

A typical Hoi An dish, Cao Lau noodles drying by the side of the street. 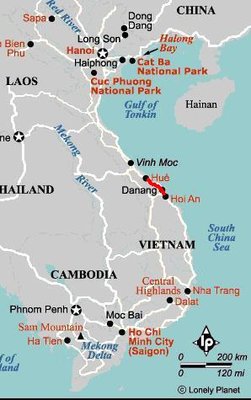 We left peaceful Hoi An, taking a 4-hour bus ride up the coast to the busier, less manicured Hué. Hué ranks third in size, behind Saigon and Hanoi. 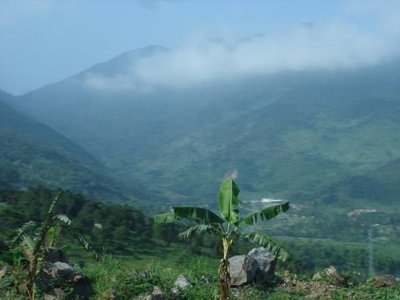 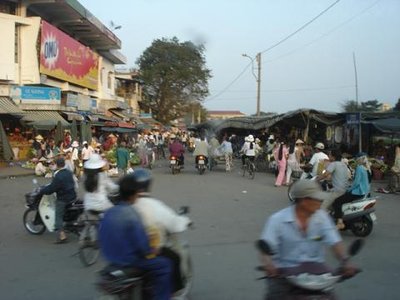 The picturesque perfume river flows through Hué. On the south side is the main city (where we stayed), and on the north is the old city - in fact, it used to be the Vietnamese capital and cultural hub a few hundred years ago. Most of the city was destroyed during the French war, and most of what was left was destroyed in the "American War", but there were still a few sites to be seen. We rented bikes and rode around the Citadel and entered the Forbidden Purple City (no longer forbidden!). 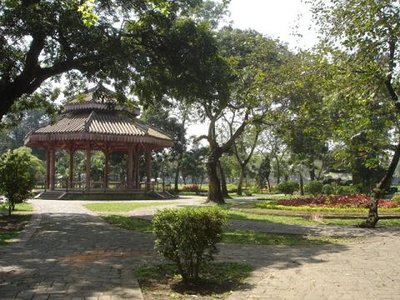 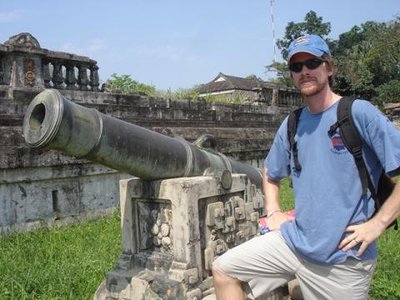 We ran into our friends from Québec again, so we ended up hiring a dragonboat for a little sunset cruise on the Perfume River. 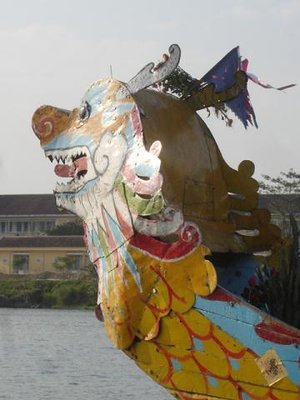 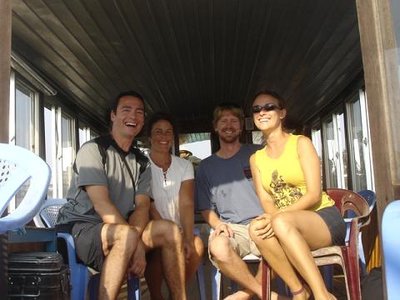 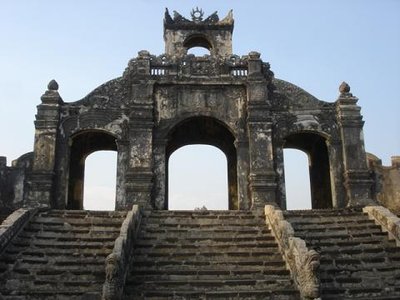 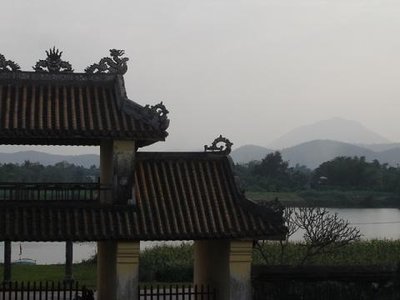 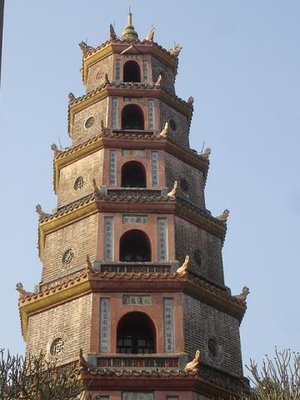 This pagoda was made famous in the 60's as it was the place where the monks who set themselves on fire in the streets to protest the war came from.

There was not a whole lot else to do in Hué, but it was a good place to relax and recover from our constant traveling. 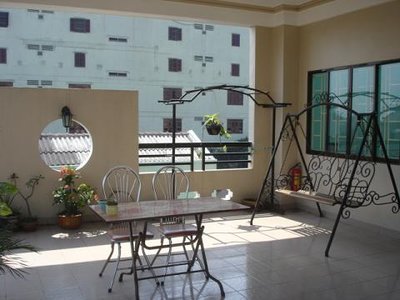 Our "private" balcony on the 4th floor of our hotel.

A cat helping me finish my vegetarian sweet and sour "pork". 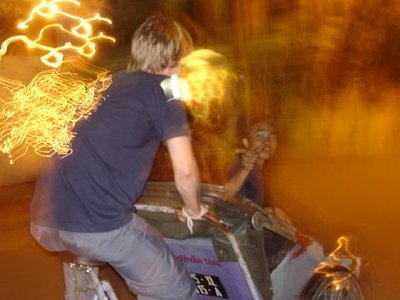 Posted by rebmamber 22:33 Archived in Vietnam

it took me about 5 weeks to try to log on, forgot my password, so had to make a new one today. i had coffe this morning, it was good. its getting hot again, i miss the cold weather.... oh wait, this is your blog, not mine

It's heartens me to see so many bicycles in daily use and that parachute pants are finally back in style!

glad you got to see hoi an...neat little city...looks like the cyclo driver is holding justin up at gun point by making him do all the work...im guessing he said something like "give me parachute pant and peddle harder, you yankee!"

Justin. nice pic of you looking down the poor vietnamese tailor's shirt. I thought you had more couth than that. The upside is, you yourself are wearing a sweet Guster shirt. way to be. I enjoy looking at the blog. Seeing as how I don't have a window near me at work, I think of it as my window into another world. Boy, I need a life or a new job.

Brad and Angelina (I mean Justin and Amber),
Your trip is unbelievable!
Beautiful- Beautiful imagery!(as always)
Are you comming home with kids?

PS. Gommy LOVED the flowers! You guys are tooooo much!

how much do you think those little kids would go for on the black market? they're pretty cute!

Parachute pants? Is that all you got. I'm standing next to a cannon with a huge smile on my face, now that deserves a comment...
Justin

I gather the parachute pants help you return to earth whenever your big cannon goes off...

your "cannon" may come in handy when you need to pitch a tent in the bush...for camping, of course...

more pictures like the pagoda. if you notice, when you scroll up and down it moves in almost real time motion.

will you guys be back in april, say mid month. ill be in fla for a time, and would love to see your cats.

Coomes, we should be back right at the end of April/first of May. Maybe through Chicago, so perhaps we'll see you there????
Justin