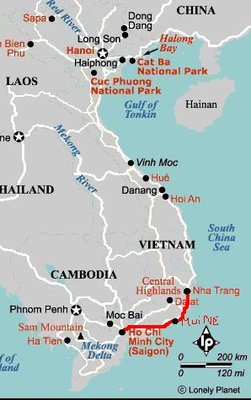 After a short visit in Saigon, we had to leave in order to be able to catch a glimpse of a couple of spots along the coast. We hopped on a 5-hour bus journey to a little beach town called Mui Né. There really is only one road in this town with resorts on the beachside and restaurants, bars and resorts on the other. Since we love the beach so much, we opted to pay $5 extra ($15) to get a nice room in a hotel on the beachside, where you could hear the waves crashing from your doorstep! Unfortunately, the water was a bit rough (and cold), so we just enjoyed the nice weather on the beach. This is apparently a huge spot for windsurfers and kite surfers since the intense wind and sunny skies are fairly consistent here. 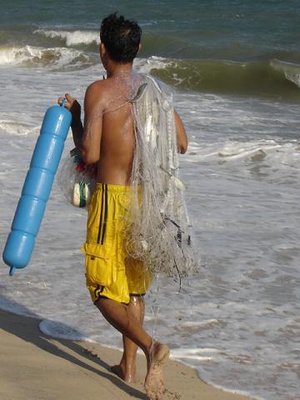 The following day, we hired a motorbike to check out some of the local scenery. Some of the major attractions are a couple different sand dunes in the area. We didn't associate Vietnam with dry land and sand dunes, but much of the scenery around here looked like it was straight out of the desert (but with a couple of palm trees sprinkled in).

A couple of kids off to school.

We headed first the White Sand Dunes, which were about 35 km from town. We took a beautiful coastal road to get here, and the best thing about it is that there was hardly anyone else on it. 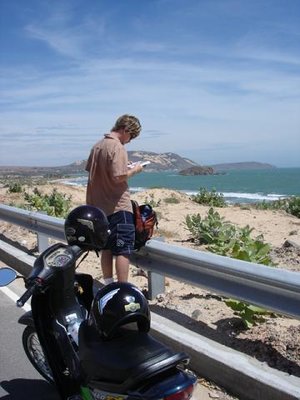 Some red canyon views along the road.

We arrived at the White Sand Dunes, and since neither of us like to get up too early (especially me, Amber), we managed to get there in the middle of the day. Thinking back, it was probably not the best idea to visit a large expanse of sand where you have to climb up steep, sandy hills in the heat of the day, but it was very nice nonetheless.

On our way back, we passed by a nearby fishing village with beautiful boats docked together in the water. There are boats that are used here which are completely round! When we stopped for photos, a couple of schoolgirls on their way home were interested in us. I let them take a look at the boats through my telephoto lens, and then they asked if we could get our picture together!

We made it to the Red Sand Dunes right before sunset. On the way in, we were attacked to buy a barrage of "sand-slide salesmen", this one using a new technique which we hadn't seen before!

It was great to eat our last meal at a nice restaurant on the beach with these guys running around your feet!

The next day, we hopped on another bus up to the town of Nha Trang. This town was definitely bigger than the last with a lot more to do, however, the first night, we hit a spout of rain which quieted the town down to a whisper.

Nha Trang in a fog.

The next day was sprinkling on and off, so we just putted around the city. We went to an art gallery for a Vietnamese photographer, Long Thanh. It was quite a spectacular exhibit and we got to meet and speak with Thanh, himself. Check out the “Galleries” at http://www.elephantguide.com/longthanh/home.htm

On our way back to our hotel, we ran across another Bia Hoi establishment. As it was the middle of the day and hot out, we thought it would be a good idea to pop in and have one liter between us both. However, we ended up getting invited to sit with a group of Vietnamese photographers who felt it was their personal obligation to be goodwill ambassadors for their country. Many beers and interesting food bites later, we were a little past our initial one liter! The Vietnamese will not take "No, thank you", or "Cam on, kom" for an answer!

After this, we thought it would be best to relax and enjoy a cup of the amazing Vietnamese coffee - it's nice and strong - along with some pizza!

Another adorable kid we met in the market. 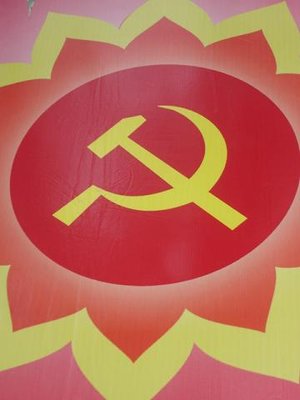 Signs of Communism, so cheery, isn't it?

The following day turned out to be less cloudy, so we hopped on a boat cruise around the islands of Nha Trang. The scenery was beautiful, and the tour was quite entertaining, complete with snorkeling (for some), onboard karaoke, (forced) dancing, and a floating wine bar.

Justin's reaction to the cold water. 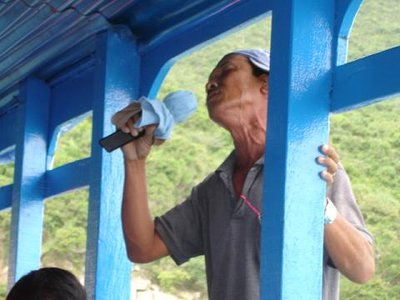 Our French singing tour guide belting it out.

We also stopped at a fishing village where we were able to get a ride in one of those circular boats. Justin gave an attempt at rowing, but he was not as good as the 10-year-old.

We met the above Aussie girls on our boat, and met up with them later in the evening. We ended up running into a few other people that we had previously met (or seen) in another city. The interesting thing about traveling is if you've met someone for a minute, whenever you see them again, you are best friends - "Hey, I know you!". This turned into quite a late evening, complete with dancing at a backpacker hang out. It was fun since this was the first time we have really done this since we arrived; however, the next morning was not as fun. Luckily, we had booked a 1-hour plane instead of a 12-hour bus ride, so we were thankful for that! 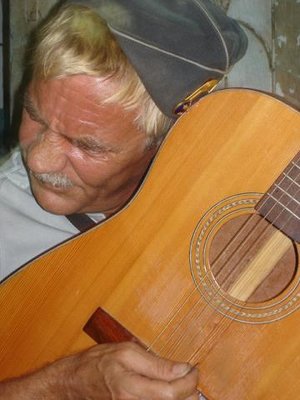 Posted by rebmamber 03:41 Archived in Vietnam

Nice Beach!
Looks like you are "dune" good !
Hey the beard is looking fine!
Question; How DO you row a round boat?
Answer; Well, you just row it around! Right?

Yes, the beard is surely the finest spectacle from this transmission! My li'l sis slamming beers with a bunch of drunk dudes on
the other side of the planet is a close second. Gorgeous pics once again!

Great pics and commentary, nice beard, if you run into any Scooby Doo casting calls make sure to throw your hat in for the Shaggy role. Now that we've seen Amber's dong...Justin? Sorry I couldn't leave it alone.

Justin representing PBR in Vietnam!! Yeah baby!! 2 words, ambulance limited. I bought some Tuborg tonight in your honor. I love you guys and "keep on rocking in the free world!"

OH MY GOD DID I SAY AGAPE? SHOOT ME (not el quail)