After a few days of busy touring to get to Saigon, we really had no itinerary once we arrived and we were happy about that. As you might suspect, Saigon is a very bustling city, with more motorbikes than you can count. We arrived into Vietnam at the end of the Tet holidays (New Year's), so it was actually a lot quieter the first two days, but on Monday, the motorbikes were out in full force! 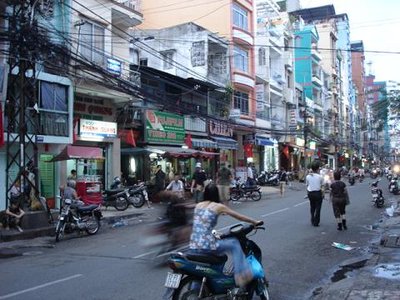 The street where we stayed. 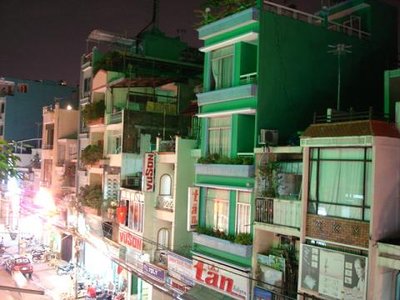 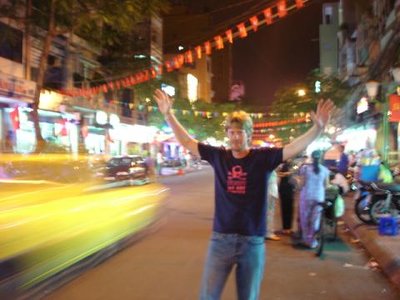 The first night we found a vegetarian restaurant that was calling Amber's name. She was able to get all the local favorites, meat free! "Seafood" pots, "fish" cooked in clay pot, fried "shrimp", etc. I tried them all and still feel the real thing is better tasting, but I have to say, they do a pretty good job imitating. 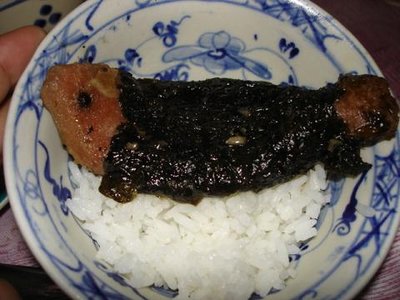 Fish head and all!

After tempting our anti-carnivore taste buds, we walked around the city and managed to find a few places to poke our heads into. 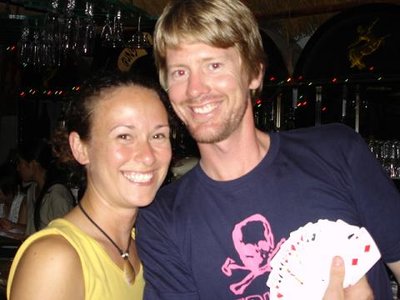 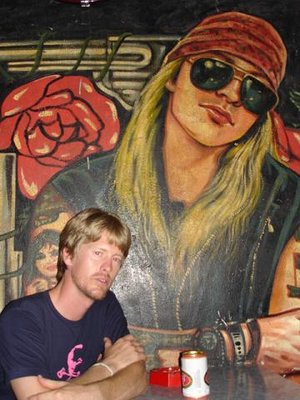 Justin wishing he was as cool as Axl in the GN'R bar. 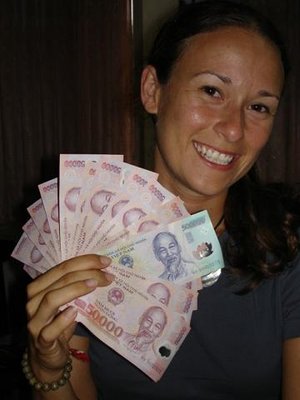 Amber is showing off her 1 MILLION DONG!

The first full day in Saigon we went on our own "walking" tour of the city, complete with the hiring of a cyclo, Vietnam's version of a tuk-tuk, human-powered, with seating for 1.5 people. 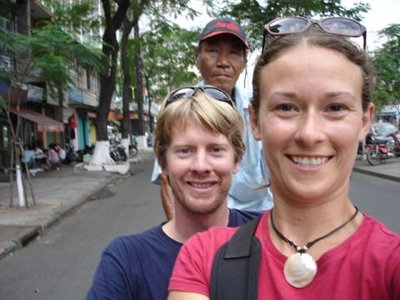 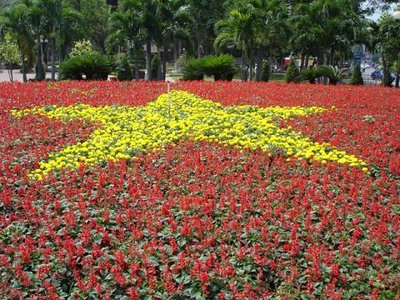 The Vietnamese Flag in flowers. 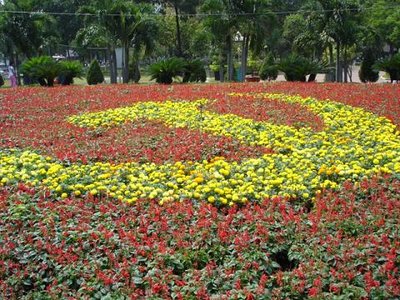 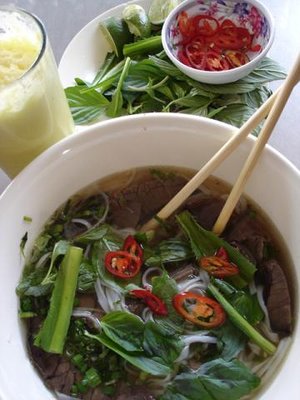 A bowl of Pho, a famous Vietnamese dish. This was eaten at Pho 2000, made famous because President Clinton ate here in 2000 when he visited. 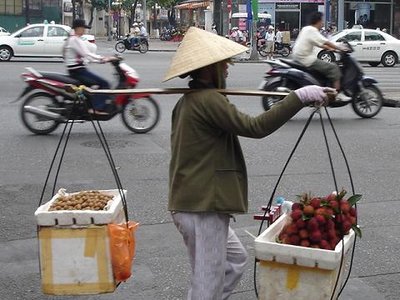 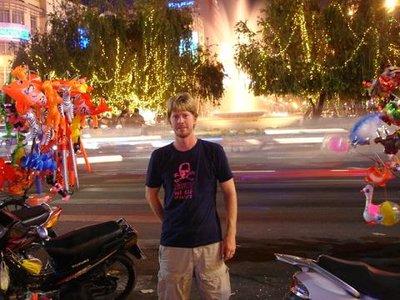 The traffic going by. 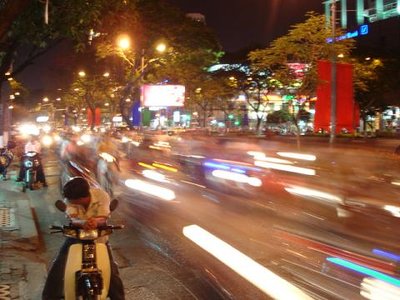 The endless stream of motorbikes. 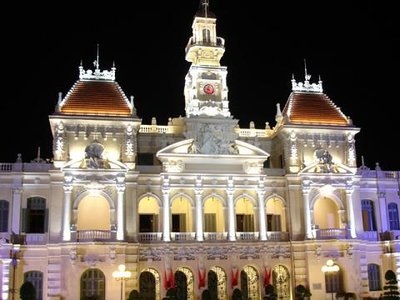 The following day we headed out to the Cu Chi Tunnels, part of the Viet Cong's tunnel network constructed to combat the southern Vietnam and American alliance stronghold around Saigon. This highly visited tourist site was actually really interesting and impressive. The introductory video was not very kind to us Americans ("evil-doers"), but you have to realize that this is a government-run attraction in a "communist" country. The ingenuity and adaptability of the people who lived in these tiny tunnels for weeks and months was amazing. We got an opportunity to try out a 100-meter (~350 feet) section of the 240 km narrow tunnel network, including going to the second level which is about 20 feet below ground. 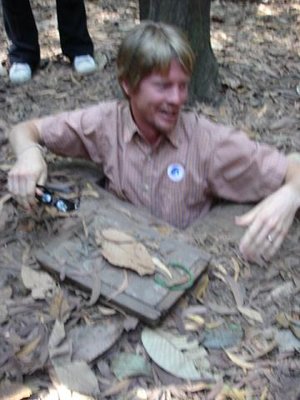 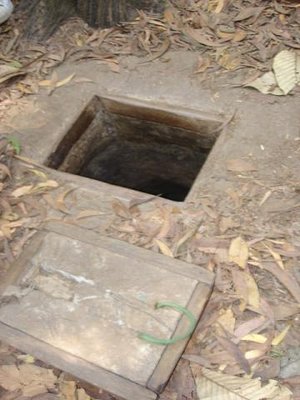 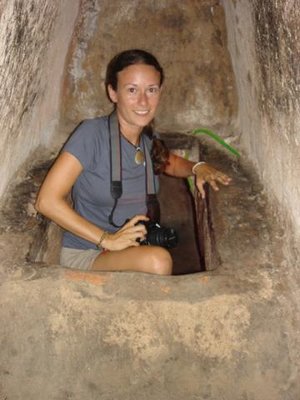 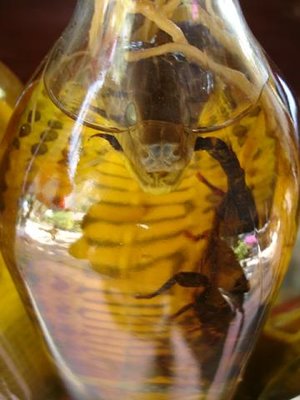 Snake Wine - we bought you all these for gifts!

We also visited the War Remnant's Museum (formerly called the Museum of Chinese and American War Crimes), again a gov't-run institution. It mainly contained photographs of many atrocities committed by the Southern Alliance (i.e. America) during the Vietnam War, or American War as it is known here. Despite the one-sidedness of the photographs displayed, it was a very chilling and horrific view of what happens during wartimes (and is surely happening somewhere as we type this).

One of the highlights of the day was our guide, Cao. Cao served in the southern Vietnam army during the end of the "American War", after which he was sent to a Re-Education camp for two years by the north. It wasn't until 1990 that he was legally allowed back into Saigon, although he had been living there illegally for many years.

We also had the opportunity to hang out some more with our Canadian and Dutch friends, including spending our last night together having a few drinks at a Bia Hoi establishment. "Bia Hoi" literally means "fresh beer", Vietnam's very own microbrew. Basically, they are set up wherever there is room, and this one spilled out into the streets every night. I guess that's because for a 1.5-liter jug, you pay 8,000 dong (or 50 cents!). 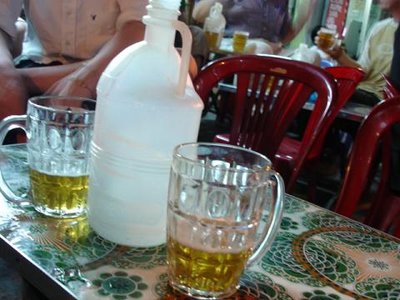 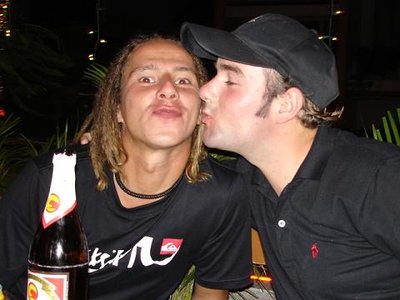 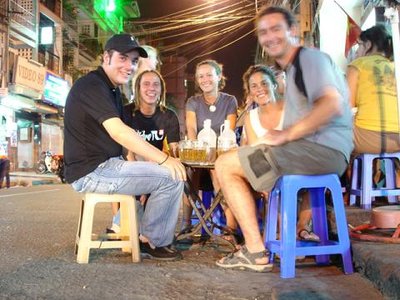 Posted by rebmamber 18:25 Archived in Vietnam

Let me get this straight...the snake head is in the wine? Check please!

Looks like your'e having a great time in Saigon. As usual, the pics are great. Nice abs on the snake!
Hugs,
Bonnie

Holy cow, Mrs. Frederiksen buy me some snake wine and I will pay you back, I won't drink it either, I just want some. So neat.

Mr Klimek got real mad at tony and I when we were discussing a problem the other day. Butthead. That's news from calc honors.

Heard you had a good time on “videophone” today! Hey why don’t you do a live feed?
Justin, You are cooler than Axl! (It’s an appropriate painting in the land of “Guns and roses”).
Bring me a bowl of Pho! Although, I would prefer a nice “real” Parrotfish on a bed of rice!

“Sit down before fact as a little child, be prepared to give up every preconceived notion, follow humbly wherever and to whatever abysses nature leads, or you shall learn nothing.”

fold your arms child, you walk like a peasant

I cant wait to get to Vietnam. We fly in in February

sound like you had a great time, right?. Though I live in Vietnam, I actually never ever visited Cu Chi Tunnels. What a pity. Hope I can arrange some time to visit it soon. Have you ever gone to the North? There are many scenic spots in the North such as Sapa, Yen Tu Pagoda, Cat Ba beach, Ba Be lake, Cuc Phuong National park, espcially <a href=“http://www.fascinatinghalongbay.com”>Halong bay</a> Why don't you try?