After 4 nights in Siem Reap, we headed to the capital of Cambodia, Phnom Penh, which is much smaller than you would expect a capital to be. Another nail-biting, white-knuckle bus ride kept us on the edge of our seats for the 6-hour journey. No rules, no one else deserves to be on the road but us, and no looking back - just amazing! 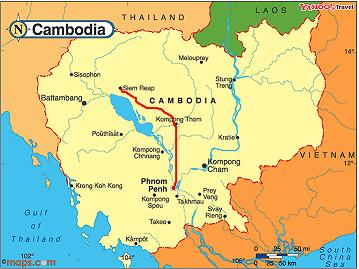 This was our route.

We found ourselves at a little riverfront guesthouse with air-con, hot water and cable TV (all the luxuries for only $10/night). We did not have any itinerary planned while in Phnom Penh, just relaxing and seeing the city a bit. We managed to stumble upon the Foreign Correspondence Club (FCC) the first evening where we sipped some drinks, watched the sunset, and pretended to be journalists. The prices were decent since it was happy hour, and the views from the balcony onto the streets below were great!

The national museum of Cambodia at sunset.

The first day we simply walked around the City and let the sites come to us. We stumbled upon a bustling street market that kept us entertained (and disgusted) for a while. Brilliant fruit and vegetables abound, people everywhere, and some not so pretty sites (especially for the vegetarians in the crowd). Scooters, people, vendors and the occasional stray dog filled every inch of this street.

The following day we hired a tuk-tuk to take us about 15 km out of town to the "Killing Fields" of Choeung Ek. This was just one of thousands of horrific sights in Cambodia where the Khmer Rouge practiced genocide from 1975 to 1979. Pol Pot and his Khmer Rouge soldiers killed 1.7 million Cambodians, or 21 percent of the population, in an effort to return the country back to "year zero" (a completely agrarian society) by exterminating or "re-educating" the intellects and those against the regime. It's hard to imagine that such atrocities happened just a couple of decades ago and they are surely happening elsewhere now. We were also surprised how little we knew about it before coming here (almost nothing).

The Killing Fields at Choeung Ek contain approximately 8,000 human skulls in a glass shrine that were excavated from this location. As you walked around the grounds there were many human bones and tattered clothing that were partially exposed, which was equally hard to stomach. 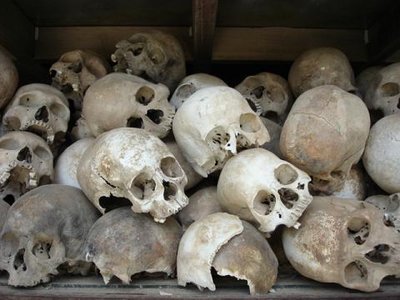 After the Killing Fields, we headed to the S-21 prison memorial site in Phnom Penh where 17,000 people were detained, interrogated, and tortured from 1975 to 1979. This former high school was taken over by the Khmer Rouge as a prison. In the prison cellblocks, there were haunting photos of the former prisoners; young, old, men, & women. If you could read or write, or even wore glasses, you were a target of the Khmer Rouge. Only about 15 people who were detained in this prison survived. 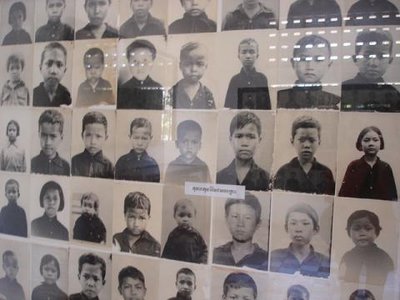 We spent a lot of time just walking around and exploring the city, as there are not too many "tourist" attractions. Here are a few photos:

One of the local kids you see around town. Some are clothed, some partially, some not at all. His family was nearby enjoying the park. 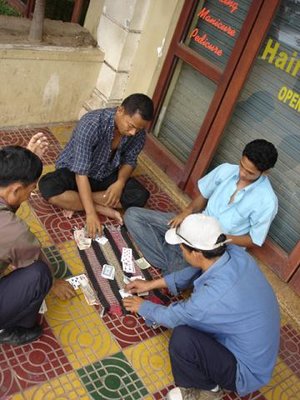 In Cambodia, gambling is a national pastime. Almost every alley you look down has a group gathered around a deck of cards. At night, they play by candlelight on the street.

A comfortable place to nap?

Two different worlds - girls walking down the street with buckets on their heads next to a Mercedes.

Posted by rebmamber 08:26 Archived in Cambodia

Awesome pictures. I'm glad you take so many, we get a lot of cool insights and more than just the normal tourist pictures that most people take. My family included.

You got really lucky with that mercedes picture it looks like. Really cool.

Very powerful images and commentary. Thanks for the insight.

Strong images indeed!
Who’s pretending? - (you are foreign journalists)!
Yes, some of us remember all to well, those horrendous years toward the end of the Vietnam Era. Glad those days are over (for Cambodians anyway).
You continue to please us with your exposition of natural beauty and culture! I am glad you “tempered” the Killing Fields commentary with smiling children in remembrance that there is hope in the future for these and all peoples of the world.
And I know you two are great “ambassadors”!
Keep up the good work! And keep posting!

Don't know who is responsible for the photographs ~ but they are spectacular!
Keep them coming,
Barbara & Norb