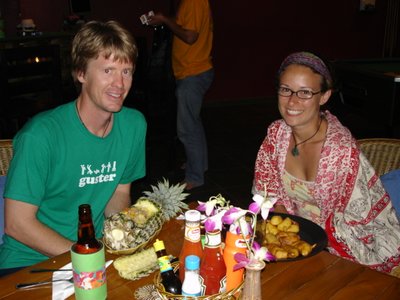 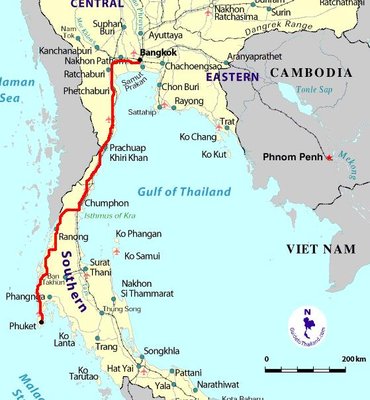 We left the islands on a 12-hour overnight bus journey back to Bangkok. It was a very interesting evening to say the least. It is nice to save a night's accommodation, but you really never get much sleep, nor do you get to see any of the countryside. Also, the bus drops you off at 5:30 in the morning in downtown Bangkok, which is an adventure in itself. Having nowhere to go, we hired a tuk-tuk to drop us off at Wat Arun, a temple along the river, where we were able to see the sunrise.

Back in Bangkok, we were lucky to stay with Jup, Pum and Patty, the Thai family we have befriended thanks to Eric & Ying. The first night we were with them, they took us out to a German restaurant. We initially thought it was funny to be visiting a German restaurant in Thailand, but we stopped laughing when we realized they had dark beer on tap. Any of you who have been over this way will understand that the beer in Thailand is horrible, unless you like flavorless lagers (Brian). An interesting thing that we finally learned that night is that Thai servers will keep filling your beer unless you tell them not to, hide your glass, and run out the door. 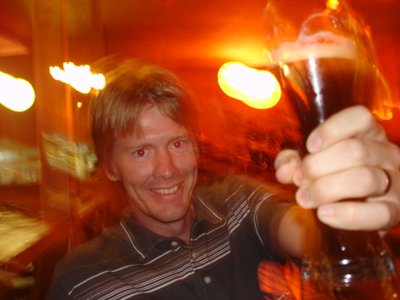 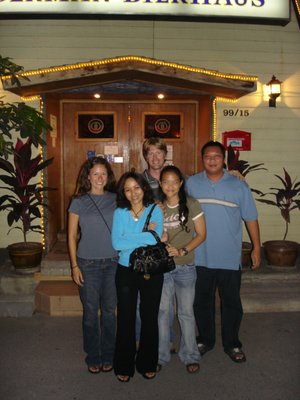 The next day Jup, Pum, & Patty all took the day off and we headed out to Ayuthaya, the old capital of Thailand. We saw the ancient ruins that were abandoned in the 1700's when the Burmese attacked the capital city and burned everything that could burn and did their best to destroy everything else. They even cut the heads off all the Buddha statues, which boggled our minds, as the Burmese are Buddhists themselves. We also visited several wonderful temples and, of course, ate well. 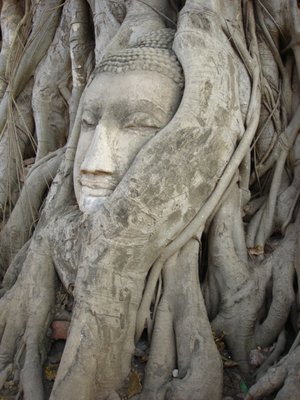 A wonderful Buddha face being taken over by a banyan tree. 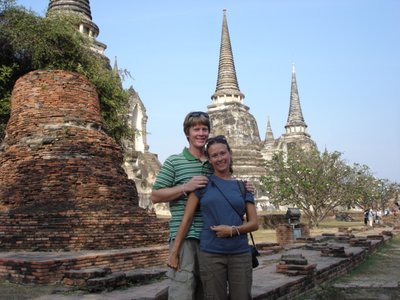 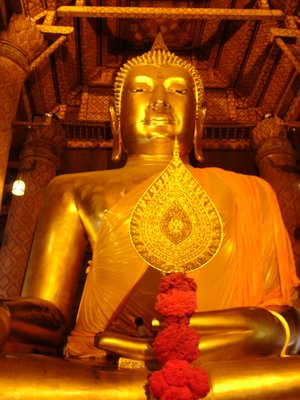 To get the scale, notice the person in his hand. 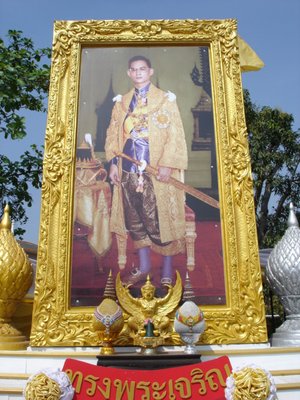 One of the ubiquitous portraits of Thailand's king, Bhumibol Adulyadej. 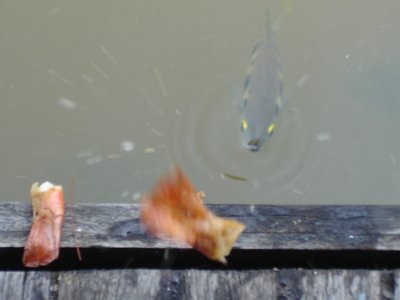 The lunch spot was along the Chao Praya River, where we were greatly entertained by spitting Tiger fish. Notice the piece of shrimp on the right is airborne. 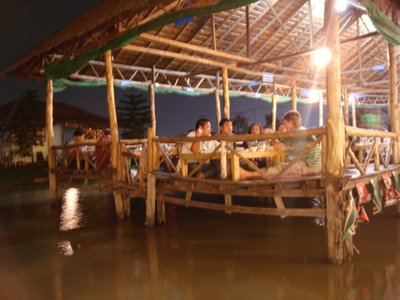 From our experiences; Thailand is an assault on your senses. You are bombarded with smells, sights, and sounds everywhere you turn. The streets hit you with good (food) and bad (open sewers) smells; the temples smack you with incense, quietness, and colors; the beaches meet you with salty air, hot sunshine, and crystal clear water; the people greet you with kind words and leave you with a wonderful respect for their culture.

Thanks for the compliments on all the photos. I (Amber) must admit however, that Justin has taken a good share of these as I am usually off fiddling with my SLR - so he deserves at least half of the credit! Here is another one of his "award-winning" shots of a Thai "school bus". 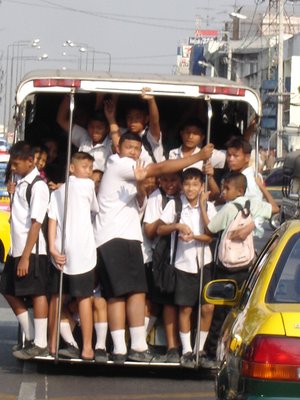 Posted by rebmamber 00:59 Archived in Thailand

My apologies to Justin re; photos. He has a good teacher!

So now your off too ____?
Looking forward to your next leg!
UB

the pictures of the islands and "The Beach" were amazing. Thanks for keeping us all updated

This spitting tiger fish fascinates me, why is he spitting, and how is the distance and accuracy?

Budweiser? - tasteless lager? or KING OF BEERS! All hail to the crown

i think amber helped justin find his calling...working for national geographic...as for amber, just stick to teaching...your pictures are o.k.....;-)

By far the most stunning pics are those of beer-wielding Justin, so clearly Amber's superior skills are proven in capturing the beauty lurking within sordid indulgence!

Keep the photos coming ~ we are enjoying the education. You should be celebrating New Year's tonight (Sunday the 29th) ?

Kathy and I are reliving our youth through your shared travels.

We still can not get over the baby elephant!

Floubert said inner peace is gained not in any particular place but in the mind. You can spend an eternity looking for the most exotic and in order to gain hold of yourself, your one self, you need to acquire an air of belief in your purpose. The hardest part of this trip is going to be leaving, but in fact, if you have travelled right, it won't matter where you leave to, so long as you keep returning to yourself, wherever that physically puts you is of no concern. Postscript: Also needed: pictures of music, rainbows and something not expected. Show us more how you are not Westerners, or places Westerns might not line up on exhaustive tours to see. Put yourself in their culture, as you are, so to put us in it too.

iwannafly has enlightened you. (just so you know)

I just want to say good job on the pictures. And the buddha in the tree is would be an amazing sight to see.

Are you coming home? If so, bring lots of copies of you two's pictures so I can steal them, yes?
If you're not coming back right yet take more awesome pictures.

(to Mrs Frederiksen)
Almost everyone aced that calc test. 15 A's, 2 B's, 2 D's, and an F. Okay so only worthy people aced it, Klimek is alright still though, its not because of him that we got the grades. We'll talk about it once you get back (strategerize).

Loved it all! Thank you both so much. Makes my own "world" seem pretty small. BTW-Was that Leon Russell (lower rt.) in the band mural?
Hugs,
Bonnie

Welcome to the Amayyyyzing Race. On this leg of the race, our contestants must face a roadblock. They must chose to "Bus it" or "Cab it". While cabbing it is more expensive and may be faster, it may end our contestants lives or cause brain damage.